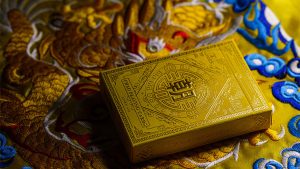 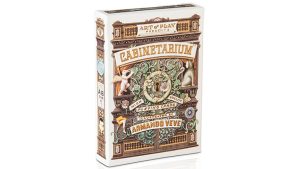 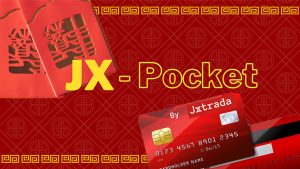 China’s extraordinary history dates back to more than 5000 years and provides a rich collection of royal subjects which forms the basis of the Chao Playing Cards. The Imperial Yellow Edition CHAO Playing Cards has a limited production run of 2500.

Over the lengthy span of Chinese history, each Chao (which is the pronounced word for dynasty in the Chinese language) is distinguished by the name and the impact of the individuals that ruled over that period of time. This very special and unique deck of cards pays tribute to four of the greatest and most recognized dynasties in Chinese history – Han, Tang, Ming and Qing. Each dynasty has an outstanding and reputable Emperor, Empress and General, each with their own notorious traits and fascinating stories. The CHAO depict these influential men and women that were renowned and celebrated from each of the four famous dynasties.

This is the fourth edition of the CHAO playing card deck series which takes on an imperial yellow color. Yellow is a very important and traditional color in China and back in the days of the dynasty, yellow was a forbidden color as only high-ranking officials and the Emperor’s bodyguards with high honor wore this color. The color represents power, royalty and prosperity which we have used in this edition of CHAO, used on the card backs and also on the tuck box where it is also embossed and imperially gold foil stamped. There is a limited production of 2500 decks only on this edition. Never to be produced again. So once they are sold out they’re gone.

To capture the essence of each dynasty, much time and resource was put into the research part of this project. The illustrations and design takes inspiration from not only the renowned rulers of the four Dynasties but also from Chinese culture itself, which is visible throughout the deck.

The chosen Chinese Emperors, Empresses and Generals for the King, Queen and Jack cards all represent great power, wealth and wisdom, each with different traits and personalities and each dynasty holds their own trademarks to differentiate them from others. Inspired by these different elements, each Emperor features distinct clothing and accessories from their era, Empress’s have different hair pieces and holds the instrument that they played and Generals wear armor and yield the weapon used to fight in their notorious battles. Fine intricate details are added onto each court card, allowing each individual to possess different facial features which best reflects their character.

The Chao was designed to closely follow that of a traditional deck of cards in terms of positioning including head facing direction, hand placements and the presence of weapons and artifacts.

The 4 Aces includes very detailed Chinese patterns. We also added a Chinese dragon on the ace of spades – a symbolism of imperial power and strength.

A new limited edition deck (only 2500 will be produced) manufactured by MPC. The card stock used is the M32 linen air coupled with the highly sought after BETA finishing which was made for truly exceptional handling.

Feel the unique difference on these newly engineered deck of cards if you haven’t already. As this deck is a limited edition, once it runs out, that’ll be it. If we have any more decks left after this project, they will be sold at a higher retail price on our website until they run out.

The tuck box completes the overall aesthetics of the deck and come in a carefully chosen color to represent Imperial Yellow, a symbol of honor and a representative color of China. Embossing and gold foil stamping is used to symbolize wealth and royalty.

The CHAO Playing Cards are designed and manufactured by MakePlayingCards (MPC)