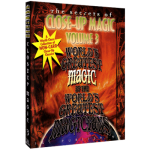 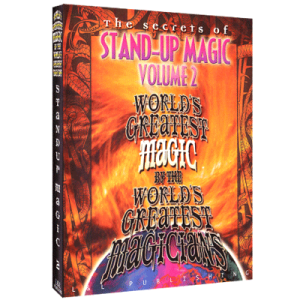 Magicians who specialize in close-up magic are constantly in search of material that doesn’t use playing cards. Easily seventy-five percent of the magic that’s been published over the last 50 or 60 years has been card magic of one kind or another so quality non-card material is a relatively scarce commodity in the literature.

In this video, you’ll meet seven different performers presenting and teaching powerful close-up routines that will wow any audience – and there’s not a playing card in sight! John Mendoza leads off with his stunning version of the Benson/Alan bowl routine, complete with three jaw-dropping final loads that actually make sense. Next up, Tommy Wonder demonstrates a truly impossible feat as he magically threads a needle with 20 strands of thread, creating a wonderful souvenir in the process. Al Schneider performs a great money printing routine while teaching the proper handling of a Himber Wallet at the same time while Henry Evans shows off a whimsical miracle where a silk handkerchief is produced from a photograph. Master coin manipulator David Roth magically transforms four U.S. coins into coins from different countries before causing them to vanish and reappear in a toy globe that was in plain sight throughout the routine. Johnny Thompson reaches back into magic history to perform and teach Max Malini’s classic assembly trick while, last but by no means least, Larry Jennings demonstrates a signature effect, his one cup-one ball routine, which begins with the magical production of the cup and ends with its complete vanish.

It’s been said that even the world’s largest and most spectacular stage illusion cannot create the impact – that feeling of pure astonishment – of a good, well-performed piece of close-up magic and in this video, you’ll find seven compelling pieces of evidence to that effect.