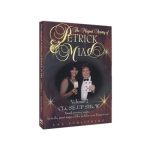 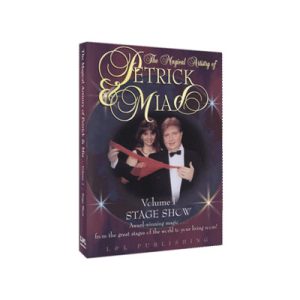 Petrick & Mia have cast their magic spell over audiences the world over-from the showrooms of Las Vegas to the most prestigious stages in Europe. Winners of many of magic’s most celebrated awards, including the Dragon Award, FISM Special Award of Merit and the Academy of Magical Arts Award, Petrick & Mia’s special blend of magic, comedy, modern wizardry and originality have enchanted and amazed audiences for over 20 years. In this stimulating video series, Petrick & Mia perform their original magic creations for an enthusiastic audience and then take you backstage to meticulously explain the devilish and innovative workings of it all. You’ll marvel at the impact of Petrick & Mia’s magic and then you’ll be thrilled at how clever the thinking behind it all is and how simple it is to add these miracles to your own act. Whether you do stage, parlour or close-up work, you’ll love the magical artistry that is Petrick & Mia.

Petrick’s Ace Routine – The four Aces are produced from the deck one at a time with a magical flourish. The Aces are then cleanly placed into piles with three other indifferent cards in each pile. The Aces vanish and gather together in one pile.

Ace of Diamonds – A spectator selects a card and the magician finds the wrong card. Failure turns to magical success as the card is miraculously changed into the selection.

Undercover – A blank card placed into a transparent folder changes into a previously selected card.

Pip Penetration – A card is selected and replaced in the deck. The deck is placed into the case and the performer taps on the case. Three pips falls to the table and when the deck is removed from the case, the selected card is found to be missing those very pips!

Jumbo Card Surprise – A card is selected and returned to the pack. Nine cards are dealt to the table but none of them prove to be the selection despite the performer’s claims to the contrary. However, when the cards are turned over, they form a jumbo picture of the selected card.

Color-Changing Card – An indifferent card changes into a spectator’s selection in a visual way right in the performer’s hand.

Trapdoor Card – A signed, selected card is returned to the deck, which is then secured in the case with an elastic band. A jumbo card is placed on the table and the selection appears beneath it.

Choo Choo Coin – Two cards are selected and placed onto the table in two separate places. A large coin is placed underneath one and with no false moves, the performer causes the coin to vanish and reappear under the other card.

Magic Eye Box – As he deals, the performer is able to divine any card the spectator stops him on. This ingenious method has many possibilities for the magician and mentalist alike.

Choo Choo Card – A selected card vanishes from underneath two tabled cards and is found reversed in the middle of the deck.