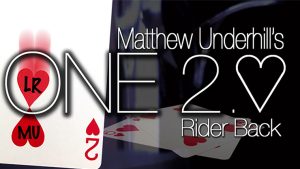 ONE 2.0 (Gimmick and Online Instructions) by Matthew Underhill $40.00 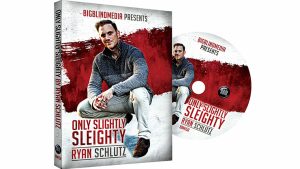 A romantic and eye-popping effect that will leave them gasping!

This is a complete set of the 2 of Hearts Version on Rider Backs.

One of the most commercial card effects of all time just got better. For the first time, ONE by Matthew Underhill, is available with a brand new Four of Hearts version and the Two of Hearts both on Rider Backs.

Perfect to perform for couples, ensuring big tips and memories that will last a lifetime.

A card is signed by the spectators.

Two of the hearts are initialed.

One initialed heart is then visually pulled across the face of the card until it rests side by side with the other.

In a beautiful and artistic piece of magic, the two hearts become ONE.

This provides the spectators with an incredible souvenir that freezes the moment of magic perfectly.

What people are saying:

“Matthew has taken the Anniversary Waltz, the most classic of all the plots in card magic, and not just given it a new method, but he has given it a face-lift every worker will LOVE!”
– Justin Miller

“Didn’t think Anniversary Waltz could have a substitute until I saw this effect. A perfect giveaway! I’ll be having a lot of fun with this one!”
– Alex Pandrea

“What a truly astonishing moment for the unsuspecting participants – this is a perfect wedding/anniversary card trick which leaves them with an impossible object to remember you and your magic long after the event. I want it in my close-up case – send the first one to me!”
– Nicholas Einhorn

“Great! Love it! Awesome give-away and a perfect magic trick for a couple.”
– Bill Abbott

“I can’t imagine that this would fail to get strong reactions!”
– Tom Stone

“I really think this is a brilliant effect that leaves the spectators with an impossible souvenir. Thumbs up to the young creator!”
– Alexander Kolle

“Simple, effective and most of all, very commercial. I can see myself performing this routine for wedding close-up gigs, the perfect memento to give to the married couple. Very nice!”
– Luca Volpe
“A beautiful routine that will go straight into your act. Get this NOW!”
– Kevin Schaller

“Wait till you guys see the NEW handlings for this. It is a rare thing for me to perform other magicians’ effects, but ONE is definitely going in my real world repertoire!”
– Justin Miller