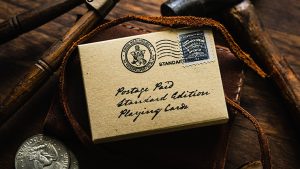 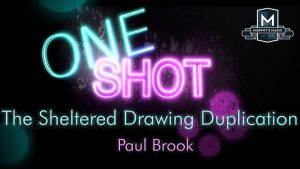 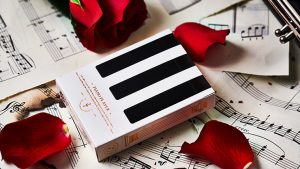 The Postage Paid deck was originally inspired by a close playing card collector friend named Joseph Pierson. Joseph has one of the most extensive and diverse playing card collections in the world. On Joseph’s Instagram feed, he posted images of playing cards from the early 20th century that were written on and sent as postcards. Using cast-off playing cards was a common occurrence before the post office made the minimum size of a parcel 4″x 6″. This collection of playing card “postcards” sparked the idea in my brain as I wanted to see the rest of the cards in the incomplete deck Joseph had managed to piece together over the years.

I set to task and created my own deck of postcards playing cards, using Joseph’s unique deck as the springboard for the idea.

Each card in my Postage Paid deck and also in Joseph’s postcard collection features a stamp and also postal address of the recipient of the card.

Each card also has a traditional style “postage paid” stamp, canceling out the postage stamp. All 50 states are present with a city representing the state.