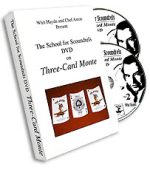 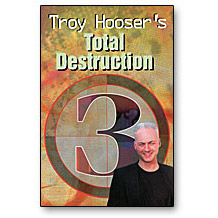 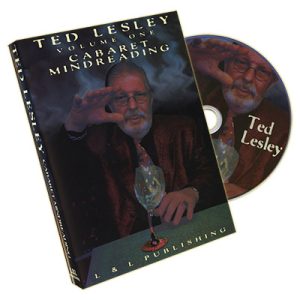 The School for Scoundrels DVD Three-Card Monte contains close to three hours of video on two discs, including fine-point instruction in all the major moves, psychology, and misdirection used in the monte, plus a three-camera shoot on the street of a reenactment of Cracker Parker’s London mob scam, an interview with Gazzo discussing the methods of the London Mob, and actual footage of three-card monte being played on the streets in Khiva, Uzbekistan.

Also on this DVD are appearances by Gazzo, R. Paul Wilson, and Doc Eason discussing their original handlings of the climax of the monte in exhibition, as well as a unique contribution to the bent corner ruse from Ron Wohl.

Whit Haydn demonstrates and explains Bob Kohler’s incredible ending for the monte, called Knifed! In this sensational ending, the performer has the spectator hold on to a quarter of the Ace, and pin the rest of the Ace facedown with a pocketknife. Even so, the Ace escapes. The spectator ends up holding on to a quarter of the Joker, and the penknife is stuck firmly through three-quarters of a Joker! Bob has worked out every detail of this ending to make it practical, certain, and a real killer.

Further, both DVD’s can be opened in a computer as data discs. Inside is found a complete non-printable e-book (.pdf file) version of our most recent edition of the book The School for Scoundrels Notes on Three-Card Monte. This book contains over 160 pages and more than 180 photos and illustrations, and contains a ton of material on the patter, psychology, moves, glossary, history, and application to magic of three-card monte. Most authorities consider this book to be the best resource on the monte to date:

What People are Saying:

“If you’ve missed anything, I can’t find it! Your historical research is astounding.”

“This is clearly the definitive book on three-card monte. Nothing else even comes close.”

“The School for Scoundrels Notes on Three-Card Monte is the best resource for information on this con that I have ever read.”

“This is the best single reference on the Monte to date.”

Also included on the ROM section of the discs is an historical appendix containing a collection of interesting and printable photos, and long passages from several of the most important primary sources on the monte, including eye-witness accounts of three-card monte being played in the nineteenth century from “Beyond the Mississippi,” and  “Wanderings of a Vagabond,” as well as George Devol’s defense of Canada Bill Jones from “Forty Years a Gambler on the Mississippi,” and Allan Pinkerton’s eye-witness account of Canada Bill in action from “Criminal Reminiscences and Detective Sketches.”

Both the video and ROM portions of the disc are meant to provide the student of three-card monte with the most complete, accessible, and illuminating resource on the game ever offered. Much of the information contained in this set is original and/or unpublished.

Whether you are a magician, gambling expert, historian, or hustler-everything you need to become a true “expert” on the game is right here in this two-volume DVD.