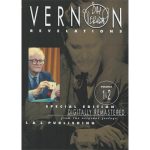 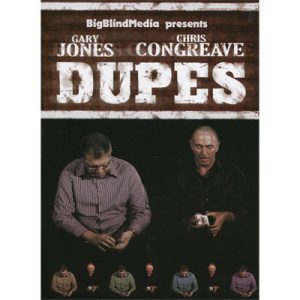 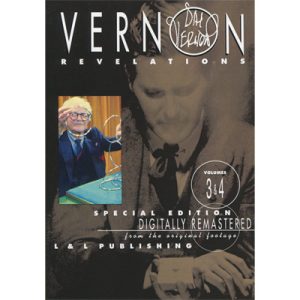 History was made September 2-6, 1982 in a filming studio in St. John’s, Newfoundland, Canada, as the life and magic of Dai Vernon was permanently recorded for future generations. Inspired by Bill Larsen, the project was undertaken by Videonics, owned and operated by Hans Zahn. The co-hosts of the filming project were Michael Ammar, Gary Ouellet and Steve Freeman.

L & L Publishing has now taken this original footage and digitally re-mastered it. Not only can we learn by actually seeing and hearing the Professor at work, but our great grandchildren and their great grandchildren will be taught that most elusive of crafts by the grandest master of them all.

Some of the important points to be considered are:

* The format is that of a jam session, with Vernon discussing his tricks, moves and routines, and generally holding court.
* All the moves, techniques, routines, tips and handlings discussed are actually performed by Vernon or one of the co-hosts, along with a complete explanation.
* Roughly half of the subjects covered relate to the published record; half the material was new and disclosed for the first time (at the time of the video shoot).
* Many times, Vernon teaches important new techniques on the Vernon classics, including improvements, or previously undisclosed handlings, even as regards the famous Stars of Magic effects.
* Some world famous routines, such as the Coins in Champagne Glass or the Fred Kaps Coins and Silk (invented by Vernon and taught to Kaps) are publicly revealed.
* Important revelations about the Erdnase techniques, which Vernon has spent a lifetime studying, form a major part of the material.

The idea behind these videos was to capture Vernon live so future magicians can experience him.

No magician should miss these videos. Dai Vernon was the Dean of modern magic and he shares great things on these tapes.

Volume 1
Gary Ouellet Intro
The Story Behind the Stars of Magic Series
Vernon on Think-of-a-Card, Dunninger,
Brainwave Deck
Vernon on Effects
Triumph-the Vernon Triumph Shuffle
and the Proper Presentation
Story of the Vernon False Shuffle
Practice & Improve Your Magic
Keeping Notes on Your Magic
Cutting the Aces-
Another Vernon Card Classic
Vernon on Passes, False Cuts
Irv Weiner’s Opening to Cutting the Aces
The Story is the Entertaining Part of the Trick
Story of the Ambitious Card
Vernon Performs the Ambitious Card
Vernon Explains an Ambitious Card Move