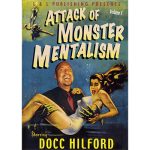 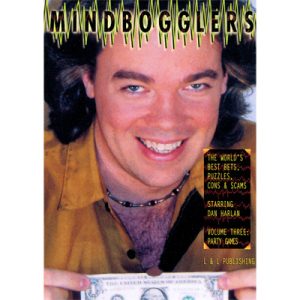 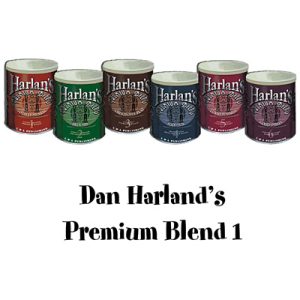 Contemporary mentalism can be as fun and exciting as a hot night at a drive-in movie. The giant screen portrays regular people, leading mundane lives until – DUNH DUNH DUNH – an unexpected monstrous event influences their lives forever. That’s what good mentalism can be – a MONSTER.

Docc Hilford is the crazed creator of the renowned Cassandra Deck, author of over 30 books on mentalism and consultant for a dozen television shows. He’s joined by professional mentalist David Alexander to discuss the psychology behind each piece. Monster Mentalism is an astonishing collection of useable effects and the diabolical methods that have made Docc Hilford infamous.

Time Will Tell – A Dunninger secret that rips the fabric of time and space! See an unsuspecting spectator set his watch to any time he wishes. A primitive sketch of a watch face eerily has the same time! RATED RT – for Real Time Mentalism.

Jailbait – From a feverish, perverted mind like Ed D. Wood Jr., comes a tale of juvenile delinquency and miscreant mentalists. Don’t miss the shocking end of this Glen or Glenda story where an ordinary man receives the disgusting ability to create “young girls” out of grown men everywhere. On the job, on the golf course, at home . . . where will it end?

Dead or Alive – Only the hand of a naive woman and the chilled fingers of a ghost touch a fateful pendulum, yet its movements tell a dozen details about the deceased; details NEVER WRITTEN! Suddenly, a cry. It’s the dead man’s name! WARNING: This routine teaches extremely strong subject matter and should be attempted only by responsible individuals.

T-4-2 – Out for a night of fun, two men secretly think of a card. You’ll be on the edge of your seat when you watch a mysterious stranger figuratively dissolve his victims with his evil eye and disclose their secrets. Audiences everywhere are stunned at the shocking conclusion of this riveting routine.

Hard and Soft Drinks – The secret world of teenage drinking parties, dancing, smoking and uncontrolled desire is our backdrop. Only the intervention of someone who possesses a psychological intelligence and an ability to manipulate paper slips can save Angela’s drunken soul. RATED RT – for Real Time Mentalism.

Uncle Klink – Harry Klink’s mad wife devised and executed a murder so horrific that it made seasoned detectives queasy. But Harry Klink was a true artist of escape. Freeing himself from the grave, his water-soaked corpse is on a rampage of revenge.You’ll see solid steel chains pass through human flesh when Klink makes his presence known. Just keep telling yourself, “It’s only a trick . . . it’s only a trick.”