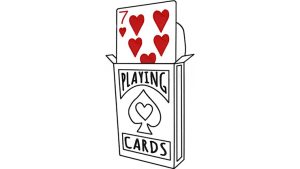 If you are the owner of our original Cardiographic Lite, you can now add another red card rising to your repertoire! (5D)

Just undo the spiral and exchange the gimmicked rising page + card and the giveaway sheets.

Cardiographic Lite packs all the power of its famous parent. Featured in David Copperfield’s touring show, this is the trick that recently earned Jon Dorenbos a golden buzzer on America’s Got Talent!

Effect: Spectator selects a card. Magician says he’s drawn the card on a pad, and turns the pad around – it’s an entire deck of cards! But not to worry – suddenly a drawing of the spectator’s card magically rises from the drawing! You actually watch it rise – looks amazing! AND, the magician can tear out the page and hand it to the spectator as a souvenir!