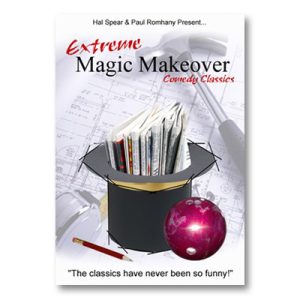 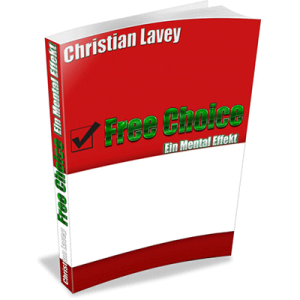 On the table are 6 cards and a set of cards in a card box. The spectator calls a number from one to six. The magician counts to the associated card and points with the finger to the card. Let’s say the spectator chooses the number five and chooses with that the 4 of diamonds. No force required, the spectator has a FREE choice (like the effect name).

Now you open the card box (which was lying on the table) and all cards are blank (or white whatever you want to call them) except for one, the card the spectator chose. The blank cards can be properly investigated by the spectator.

The benefits of Free Choice:

No rough and smooth

No force, the spectator can choose EVERY number from one to six

Logical sequence (or do you find it logical when the spectator says “six” and the magician answers: “six”, OK good, let’s spell s-i-x and every letter is a card…)

Easy reset so very good for close up

INSTRUCTIONS:
Christian has produced a very smart little e-book here, with well written instructions that will make this super easy to learn. There are a few photos which help clarify what you need to do. This could be made up within minutes and something you will want to perform pretty much straight away.

DIFFICULTY:
There is no skill needed here, and what sets this apart from the standard effects is that they really do have a free choice! There are no ‘spelling’ to numbers like some other methods out there.

LAVEY’S THOUGHTS:
For $6.00 I think this is a real gem! It’s super easy to do and is extremely direct. No force of a number – whatever they call out you will find the card in the box. The method is very clever and well thought out. There are actually loads of other possibilities using this method and in particular this could be a great routine for a trade-show performer.

Another strong element of this is that the deck of cards with the chosen card can be examined – no rough and smooth as some might think. There really is only ONE card in there.

Once you make this up you will be set up ready to go, which also makes this a great routine for restaurant workers, the reset is minima.

With a little imagination this effect could be play as large as you want, from a card in orange, card in can, etc. with a free choice chosen.

BONUS:
Chester shares some variations as well as additional ideas by Ian Baxter from Australia. What makes Ian’s idea different is that you don’t have to use blank cards, so if you don’t have a blank deck you could use this using a regular deck. It’s one of those anytime, anywhere effects.