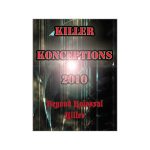 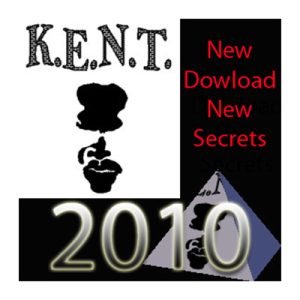 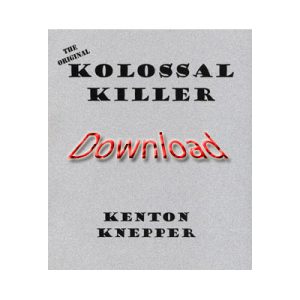 “How on earth did you ever manage to top yourself and Killer? Fantastic!”

“Any number of these routines alone is worth the price you are asking. Are you trying to make Magicians seem REAL again? You’re doing one heck of a job!”

Just when you thought it was safe to put away your wallet… Fans of “The Original Kolossal Killer” – look out!

That’s what people said about the original Killer Konceptions back in 2000. Back then, Konceptions was only 30 pages long and sold for $40, and everyone was thrilled.

It’s baaak…and better than ever!

Kolossal Killer has been touted as one of the true classics in mentalism and magic. It is the standard to which all others aspire.

Killer Konceptions 2010 bumps Kolossal Killer up to the next level.

Killer Konceptions 2010 begins with the out of print $40 Killer Konceptions manuscript. Then an additional 70 PAGES MORE of completely new material, classic routines, breakthroughs, psychological forces, ploys and more are revealed. That’s seventy pages of material not seen before. (NOTE: This does NOT contain the original Kolossal Killer manuscript. That may be purchased separately on our website, also in download PDF format.)

Here is a sample of what is in this remarkable work:

PLUS sections on new tips, wallet arrangements, no wallet versions, mental force versions, and a ten page BONUS SECTION FOR NEW COMBINATIONS OF KILLER WITH K.E.N.T. too.

Kenton has finally released the ULTIMATE versions of his “Kolossal Killer”. This new manuscript takes the popular ” Kolossal Killer” effect to fresh and unbelievable heights that will leave you awe-struck.

How could anyone improve on the Original Kolossal Killer manuscript? How do you top what many performers already consider “The Ultimate”? It does seem impossible, but now picture this:

This is NOT the same old thing. In fact, some of these routines are being used by others to prove that what they do is “REAL”. Heck, there is even a contribution from a Russian psychic. We’re not kidding around here.

This is THE most powerful stuff with “Killer” ever… These are truly the modern Killer Konceptions.

Find out the secrets and routines that the pros are screaming about, and get all the material in this over 100 page ebook, for a Killer price…

Over 100 Pages Of Work With Kolossal Killer.

Really, what more do we need to say?

Need A Review To Convince You? Here Is A Review From Online-Visions.com:

“Killer Konceptions 2010”, edited by Kenton Knepper, proves one thing: you may have purchased “Kolossal Killer” but you really haven’t “gotten” it until you’ve read this ebook.

That’s about as high a compliment as I can give “Killer Konceptions 2010”, and as strong a recommendation. You see, I’ve been a huge fan of the original “Kolossal Killer” since it first came out. I mean huge. As in, even as I type this, I’m ready to go with the thing. I’ve spent hours (years? Could be…) putting together my own routines and gaffs and gimmicks to make the most of Kenton Knepper’s idea. I’ve worked and re-worked those things, of course, and find myself still going back to re-tool them because 1) they’re fun to play with and 2) they are incredibly powerful pieces.

“Killer Konceptions 2010” proves in black-and-white I’m not the only one who can’t stop toying with the idea behind “Kolossal Killer”. Over a hundred pages, this ebook contains so many new methods, new ideas, new schemes, and new presentations that’s it’s almost impossible to get through this book at all: there are so many great ideas here I kept finding myself wanting to try them out before continuing on.

What kind of ideas? Well, that’s hard to say because there are way too many of them to even begin to categorize or describe them except to drop short hints (and the ad copy does well enough there). Let’s put it this way: there are ideas about performing without a wallet and with mutliple wallets; there are ideas about limiting the number of choices and increasing them; there are eerie presentations and groan-inducing gags; there are versions with few cards and versions with no cards, and there are versions that don’t even reference playing cards at all. In other words, there’s something here for just about anyone that does “Kolossal Killer”.

Personally, I found three presentations to be worth the price of the book: “A Haunted Hotel Room” which uses “KK” with pictures of hotel room doors that is just plain creepy; “Hypnotic Killer” which seemingly induces a “KK”-type hallucination onto a spectator; and “Astro Killer”, an idea that moves “KK” into the realm of astrological divination. I’d have been happy if any one of these routines was put up for sale; I’m moreso with these ideas being joined by so many other good ideas.

Good ideas, mind you, that have me going back to my own “KK” routine for some more re-working and re-tooling. Which, of course, makes “Killer Konceptions 2010” even more valuable. How can I not, considering the ideas of Doug Henning, Ed Solomon, and, of course, Knepper himself?

Just one caveat here: you need the original “Kolossal Killer”. It’s not fully explained here and you will definitely need that foundation to get anything out of “Killer Konceptions 2010”.

As I said at the start, you may have “Kolossal Killer”, but to truly appreciate all the beautiful things you can pull off with it, you need this compendium. This truly does take “KK” to the next level and shows just how flexible — and how powerful — that original idea can be.

Material: 10
A wide range of ideas and routines by as diverse a bunch of performers as you could ask for makes this a must-have collection for anyone who has the original “Kolossal Killer”. Personally, I don’t think you’ve really “gotten” KK unless you’ve got this ebook. It’s just that good.

Quality: 10
The writing style is perfect, the various pieces excellently covered. You’ll have no problem picking up the material here.

Presentation: 10
This is hard to nail down given the sheer volume of presentations and ideas. Still it’s all about the presentations for “KK” and most of these are stellar.