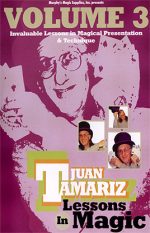 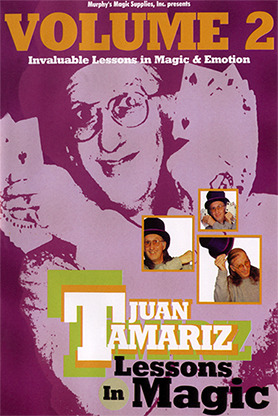 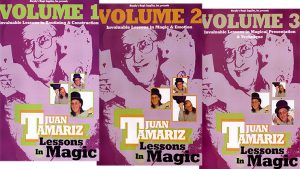 Juan is the consummate performer. Armed with only a deck of cards he can entertain a small group or a packed auditorium for hours. He is hilariously funny, but at the same time he’ll fool you like you’ve never been fooled before. He is one of magic’s greatest thinkers, a master of misdirection and a magic philosophy, and he has never had a large body of material recorded… until now! In this video you will learn invaluable lessons in routining and construction, magical emotion, technique and presentation.

– The Centauros: An enchanting tale of myth, magic, and the sea constructed to be a beautiful, musical and magical interlude

– T.P.C.-The Tamariz Perpendicular Control: Learn Juan’s closely-guarded secret sleight. Using this ingenious utility sleight you can do many things including, undetectably controlling and palming cards. Then learn three awesome effects utilizing The Perpendicular Control: A Number, Cards to Pocket, and The Rising Card.

– Doubly Ambitious: An Ambitious Card routine with two selections! They repeatedly rise in tandem to the top of the deck; a truly unique and highly magical version of this classic effect.

– 4 Aces: Juan’s hilarious ace assembly wherein the spectator does all of the magic! A masterpiece of presentation!