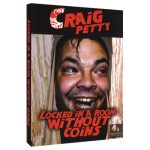 Locked In A Room Without Coins by Craig Petty and Wizard FX Production video DOWNLOAD
$25.00 Add to cart 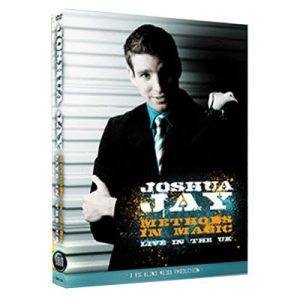 Craig Petty is back and this time he’s left his coins at home. Featuring ten killer routines designed to be used in the real world to real people. Most of the routines require just a regular pack of cards and any moves required are fully covered in the ‘sleights section’. This is material that you WILL use; all routines have been tried, tested and perfected over the last ten years. Get ready to take your card magic to a new level.

The Lance Burton Appreciation Trick
An anytime anywhere miracle that combines a super visual wild card with a card under watch kicker. The best part is that all you need is a regular deck and you are good to go.

Essence Deal
This routine is pure eye candy combining super visual colour changes and flash paper. It has been described by many top pros as the perfect restaurant trick.

EZ Waltzer
An easy to do version of Doc Eason’s ‘Anniversary Waltz’ with a borrowed deck of cards – no gaffs required.

Pickpocket
A super commercial presentation for ‘Card In Wallet’. A signed card vanishes from a spectator’s wallet and appears in another spectator’s pocket.

Monster Opener
A KILLER combination of Peter Kane’s ‘Wild Card’ and Dai Vernon’s ‘Travellers’ with a kicker that you have to see to believe. This routine has been one of the most talked about items in Craig’s lectures for years.

Sandwich With a Kick
A three part sandwich routine that gets more and more impossible with each phase. Features an ending that will literally stop the show.

The Marker
This routine has been a standout piece in Craig’s act for years. Combining the brilliance of Alex Elmsley’s ‘Between the Palms’ with a hilarious super commercial presentation this effect is one you are guaranteed to love.

BONUS ROUTINE – PHOTOGENIC
This routine was in Craig’s Award Winning Competition Act. Originally due to be released as a stand alone product we have chosen to include it on this as an added bonus. A signed selected card is found using a ‘magical camera’. As a result the remainder of the pack becomes completely blank and is given to the audience to examine.