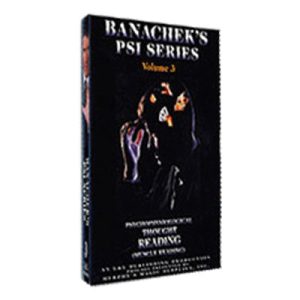 Make the value of a spectator’s playing card slowly appear on your arm in blood red…anywhere, anytime! Reveal a thought-of number from across the distance separated by phone lines. Engage two people in a fun routine where the performer predicts a page number and a word “seen” by a volunteer on an invisible Palmtop computer. Become a human lie detector in a thrilling and comical adventure. This video continues from Part 1 with close-up, stand-up and stage mentalism and mental magic with additional routines including anywhere, anytime effects plus staggering psychological ploys. Learn a multi-phase routine weaving audience direction and sleight-of-hand into one smooth effect. Also, learn the “inside” secrets of what Banachek considers one of the most powerful tools in the mentalist’s arsenal…Pocket Writing. This video includes Banachek’s discussion of his “Buried Alive” escape, his Bullet Catch illusion now used by Penn & Teller, the difference between mentalism and mental magic plus comical anecdotes about blindfold drives. You will also see a television clip of Banachek’s “Buried Alive” escape hosted by William Shatner and TV footage of one of Banachek’s early Blindfold Drives.