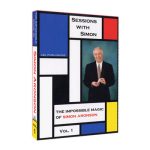 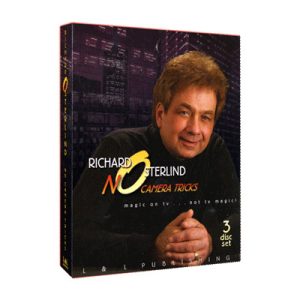 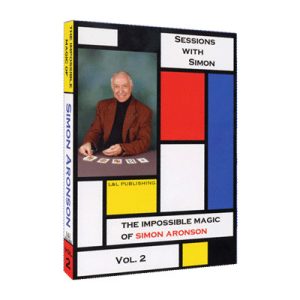 Simon Aronson has been a respected creator of innovative card magic for over 25 years. Combining his strong background in mentalism with his extensive knowledge of card magic, Simon has created a host of blockbuster card miracles that aren’t knuckle busters! The Aronson approach diabolically blends subtleties, stacks, sleights, mathematics, gaffs, thinking on your feet and much more, to produce strong, clean, impossible looking “hands off” magic that leaves your spectators shaking their heads and uttering, “But you didn’t do anything!”

Simon has selected his favorite creations for you. The performances are fun, friendly-and utterly fooling. The explanations are done in Simon’s typical style: clear, in depth, and full of the tips, subtleties, and explanations of why Simon has chosen a particular approach. It’s like a session with Simon that lets you share in his creative thinking.

O’Aronson Aces – Simon’s amazingly visual handling of the O’Henry Ace plot, with an engaging poker presentation. At the climax, all four Aces magically land under the spectator’s hand!

Among the Discards – A surprising effect . . . about surprise! A card sandwich, including the spectator’s freely chosen Ace, suddenly appears where the spectators least expect it – in full view.

Side-swiped – An Instruction Card actually becomes the spectator’s signed selected playing card while in full view! Creates an impossible object for the perfect souvenir! Used by top professionals around the world.

Mark-a-Place – An easy utility move, with a host of practical applications. Instantly locate four Queens (or Aces) at any place in the deck the spectator chooses.

Under Her Spell – A humorous vanish and reproduction of four Queens, while taking the spectator on a blind date.

Ringleader – The cleanest, most visual, finger ring and rubber band routine you’ll ever see! The illusion of linking and penetration is instantaneous, with no extraneous moves.

Self Control Lie Speller – The performer finds a card which is merely thought of, in a borrowed shuffled deck, without ever once touching the cards! Simon’s favorite location.

It’s the Thought that Counts (performance only) – Simon and his wife Ginny demonstrate the incredible two-person mind reading act they’ve performed around the world for over 35 years. You won’t believe your eyes and ears-it’s that good!

“Simon is one of the great minds in modern card magic.”
– Darwin Ortiz

“Simon’s routines are designed to bamboozle the most discriminating and intelligent of spectators and he’s willing to go to whatever lengths are necessary to accomplish that goal.”
– Michael Close