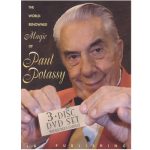 A Master Magician Reveals a Lifetime of Secrets for the Very First Time on Video!

PREDICTION COMBINATION – The performer writes a prediction and isolates it in a drinking glass. A spectator selects a card, remembers it and mixes it back into the pack. A second spectator is asked to think of a small number. The performer reads the first spectator’s mind and reveals the name of the selected card. Then, the chosen number is counted down to in the deck to find the actual selection. Finally, the written prediction is revealed to show that the performer had accurately predicted the card from the outset.

THINK A CARD – A miracle of card magic. The cards are spread at a spectator’s eye level as he invites the onlooker to just “think a card.” Though the card is never removed from the pack, the performer is able to name it. Potassy has refined this to the point where it can be repeated several times, making it all the more baffling.

CARD THROUGH HANKY – Potassy’s version of this magical classic. A card is chosen and returned to the deck, which is then wrapped in a handkerchief. The performer takes the ends of the handkerchief, gives the bundled deck a shake, and the selected card apparently passes right through the center.

POTASSY BRAINWAVE – A spectator, chosen by the roll of a die, calls out a card that is found to be the only card reversed in an openly-displayed deck. This is repeated again with the same inexplicable result. THE CARDS ACROSS – A small packet of cards is divided among two spectators and the performer magically passes cards between them while the spectators are holding onto, and even sitting on, the cards. Learn how to make this classic trick play even for a large audience.

THE CARD IN THE CIGARETTE – Another reputation maker! A chosen card is torn into pieces. One piece is held by a spectator while the others are vanished. The card is miraculously found rolled up in a borrowed cigarette which was segregated in a drinking glass even before the card was selected. And, yes . . . the piece is fitted to the card for verification!

TEN CARDS TO POCKET – A showpiece with just a few playing cards that will play for the largest audience! Cards mysteriously and invisibly travel from the performer’s hands to his pockets. Also, Potassy, along with Jeff McBride, demonstrates some unique card manipulations and provides some insight into how to construct a versatile and durable magic table.

“Paul Potassy is a Grand Master of the art of magic. These downloads capture him at the top of his game. His show is perfect, and his explanations give you the real work on polished and proven world-class show stoppers!”
– JEFF MCBRIDE

“I have a tremendous amount of respect for Paul Potassy; he is truly a professional’s professional! It’s apparent that he has performed his flawless magic routines literally thousands of times and every detail has been worked out to the nth degree. Mr. Potassy’s magic is, without question, some of the very best I’ve ever seen!”
– DARYL